The Catastrophic Theatre’s Speeding Motorcycle kicks off in Houston with thunderous acoustic guitar chords, hammered out by an actor in baggy red gym shorts, knee-high socks, and a tight white tank top. The crown of his elongated skull is chopped off, a void where his mind should be. He belts out:

Once I saw the most beautiful girl

Sitting next to me

I asked her what was her name

She said it was Laurie

Two other guitarists appear, dressed identically, except the taller one wears blue shorts and the shorter one wears green. They holler along to the next lyrical bar. Stage curtains fly open, revealing a dozen more actors in colorful garb. Each thrashes an acoustic guitar or ukulele, creating a veritable swell of bright chords. Melodically, they shout in unison:

I became obsessed with death, my friend

Certain that it would happen to me

And I would be in the hands

Of my dear Laurie 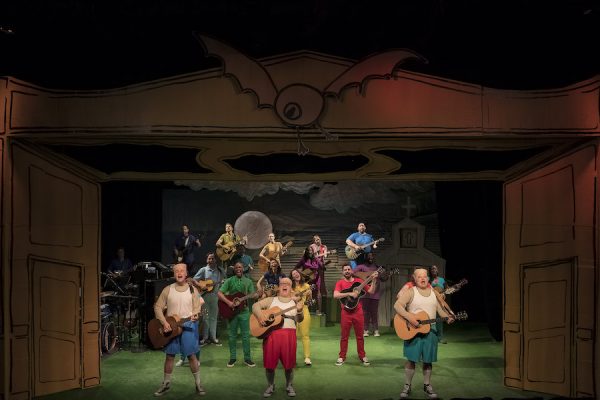 And so begins the macabre but boyuant, pleasantly hallucinatory journey of Joe the Boxer. Three actors play Joe: Greg Cote (red shorts), Joe Folladori (blue shorts), and Kyle Sturdivant (green shorts). The basics are easy enough to follow: Joe, who occasionally loses his mind, is in love with Laurie (Brittny Bush). But Laurie marries an undertaker (Bryan Kaplún) instead. Laurie and the undertaker have a baby, and Laurie starts working at the funeral home. Joe is heartbroken but realizes that if he dies, Laurie will inevitably interact with him again during his burial preparation. So, Joe goes about dying. 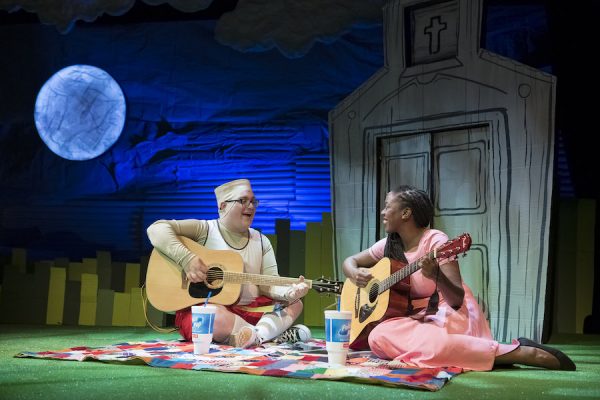 Speeding Motorcycle is told primarily through the songs of anti-folk-music-hero Daniel Johnston. The set, props, and costumes reference Johnston’s drawings — frogs, eyeballs, skeletons, superheroes, Satan — many of which adorned the home-recorded cassette albums he passed out for free around Austin in the 1980s. Laurie, the muse for many of his songs, is the name of a real woman in West Virginia that a young Johnston loved but never attained. Joe the Boxer, who also frequently appears as a narrative protagonist in Johnston’s drawings and music, is a stand-in for the artist. 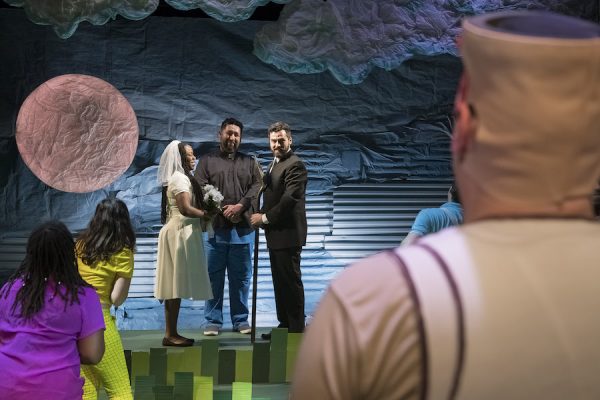 For many traditional theater goers, Speeding Motorcycle will be an introduction to Johnston’s impressive oeuvre. Despite a 2006 documentary on his life and work, The Devil and Daniel Johnston, and very public admiration from the likes of the Flaming Lips, Sonic Youth, and the late Kurt Cobain, he remains, at least by mainstream music industry standards, relatively obscure. The same year the aforementioned documentary was released, Johnston’s drawings were included in the Whitney Biennial. While Johnston is frequently referred to as “the greatest songwriter you’ve never heard of,” for decades he has been — in taste-making circles — a kind of underground-culture savant-messiah. 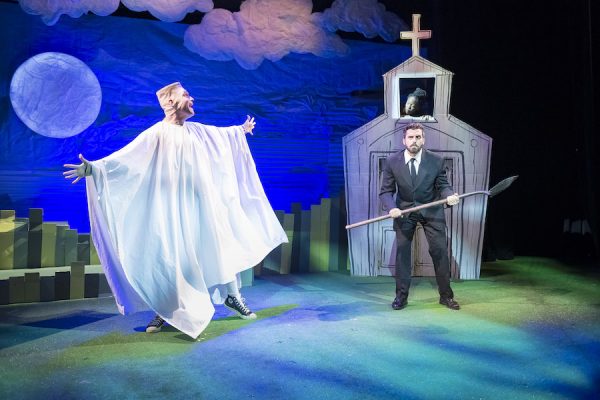 The year 2006 was also when Speeding Motorcycle originally premiered. At that time, co-directors Tamarie Cooper and Jason Nodler worked together in the Houston-based theater company Infernal Bridegroom Productions, which later morphed into the present-day Catastrophic Theatre. The current Speeding Motorcycle honors their play’s original charge, but features a few reconditioned musical pieces, mostly new cast and band members, and some playful costume updates. It’s not so much a standard revival as it is a return trip, a chance to further explore the uncanny world of unrequited love Johnston has spun through songs, drawings, and paintings for decades. 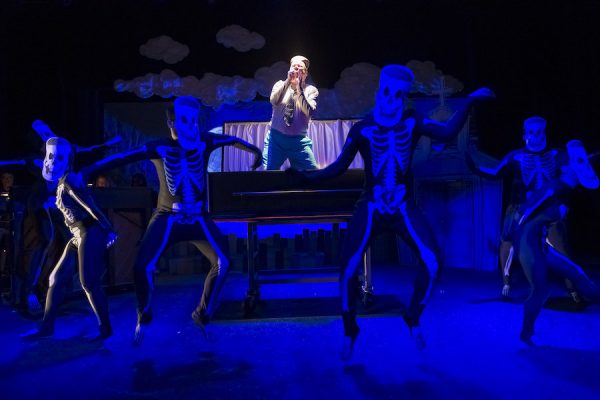 Part of what makes Johnston’s own story so compelling is how creatively prolific he’s been in the face of personal adversity. Over his 35-year career, he’s wrestled with schizophrenia and bipolar disorder — likely the inspiration for Joe the Boxer’s being played by three different actors. Johnston notably spent stretches of time in psychiatric institutions. In 1990, he experienced a psychotic episode in his father’s two-seat plane and pulled the key from the ignition mid-flight, forcing his father to crash land the plane. A couple of years later, he turned down an incredibly lucrative recording contract with Elektra after deciding the label was not to be trusted; they’d released albums by Metallica — musical agents, in Johnston’s estimation, of Satan. 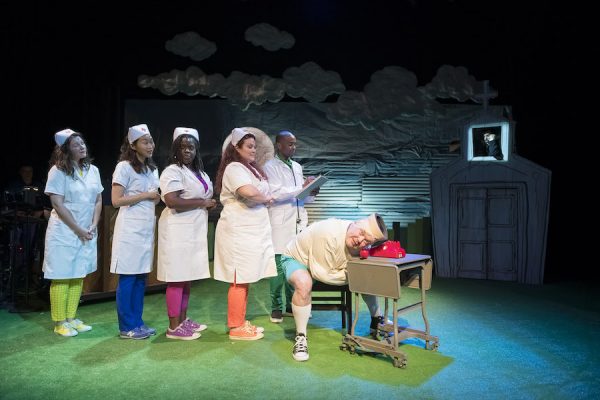 In spite of Johnston’s personal strife, Speeding Motorcycle manages to be a joyous experience. It’s a celebratory, generative work that confronts mental health, creativity, and emotional pain by means of mostly self-aware comedy. Rather than asking us to pity Johnston, it presents the flaws of his avatar, Joe the Boxer, as matter-of-fact. That’s a small, but not insignificant, step towards destigmatizing mental illness. That said, there’s something unsettling that reverberates throughout the play. Joe’s obsession with the character Laurie, referencing Johnston’s own decades-long fixation with the real Laurie, is difficult to always laugh off as innocent. When Joe is committed to a psychiatric institution, the staff allow him to make a phone call to Laurie’s home. The undertaker answers and, suspecting that it’s Joe, understandably doesn’t want to pass Laurie the phone. So, Joe lies that he’s a family member of Laurie’s, scamming his way into speaking with her briefly. A musical number ensues: Johnston’s 1960s pop-influenced Man Obsessed.

He couldn’t be a lover

So now he’s a pest 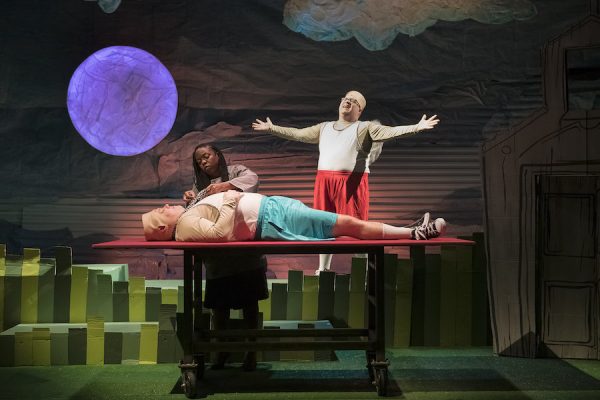 In the context of the play, it’s a very funny passage. But in 2019, it’s challenging to just bop along. A “man obsessed” enough to die, just so Laurie will be professionally obligated to touch him, is disconcerting, to say the least, regardless of his mental acuity. When does a “pest” become a possible threat? Back in 2006, the gut-punching documentary The Devil and Daniel Johnstonappeared simultaneously with the original Speeding Motorcycle production. Nodler, Cooper, and company were wise then to make levity the contrasting principle in their surreal adaptation of Johnston’s worldview. While it’s not my impression that they mean to necessarily shrug off Laurie’s experience, it might have made for a richer, more complex revisitation if they’d permitted themselves to dig a little more deeply into the uncomfortable elements. A fair counterargument here is that the narrative perspective in Speeding Motorcycleis that of Johnston’s sometimes-parochial, tragic mind. Cognizant of that, I’ll grant that Laurie, like the undertaker or dancing skeletons, isn’t really meant to constitute a three-dimensional, autonomous individual. But I do think it would be more interesting if she, specifically, were. 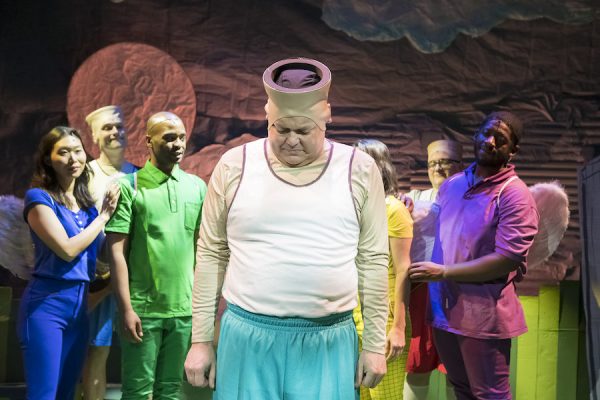 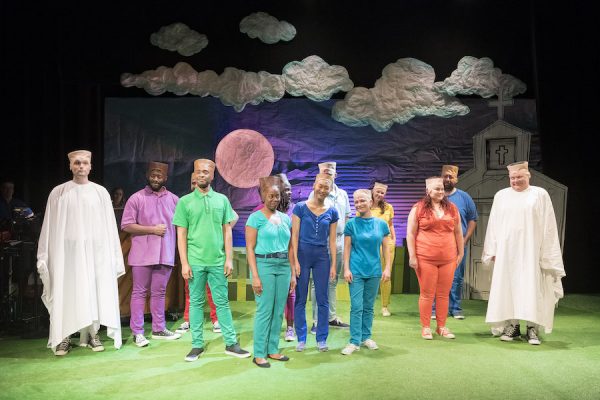 I raise that critique with genuine affection for my Speeding Motorcycleexperience, because the rest of the production is damn near flawless. It’s a phenomenal piece of theater for which reviews have been appropriately gushing. I’ve long been a fan of Johnston’s songwriting, but admit that I’d missed heaps of stunning complexities that musical director Anthony Barilla and vocal director Alli Villines (who also plays a nurse and an angel) have brought front and center. The on-stage band has a riotous, infectious stomp with great woodwinds and brass, yet they can transition on a dime to drench the stage with Badalamenti-worthy atmospherics. Ryan McGettigan’s set, populated with Lauren Davis’s props and Macy Lyne’s costumes, is cartoonish and explosive, twisted by Jack Jacobs’s lighting into a confectionery kaleidoscope. And Cooper’s choreography is loose, warm, and endearing, much like Johnston’s lo-fi home recordings that inspired the play. 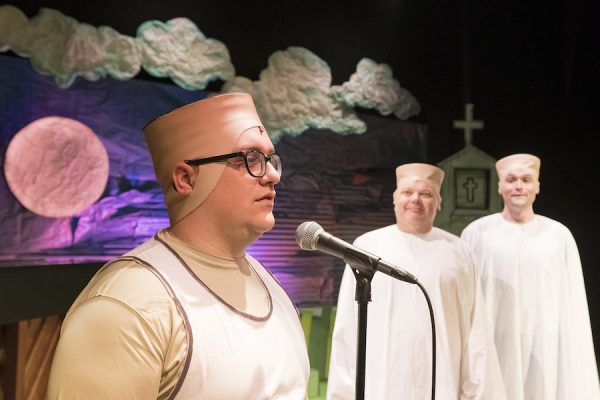 Speeding Motorcycle is surely a testament to Johnston’s singular, off-kilter genius, and to the copious morality plays nestled within his deceptively simple doodles and balladry. It is also a testament to Catastrophic Theatre’s prismic-like ability to refract a simple(ish) story of unrequited love into a radiant, immersive spectrum of sights and sounds.