A weird ‘Leap’ is the perfect Catastrophic play 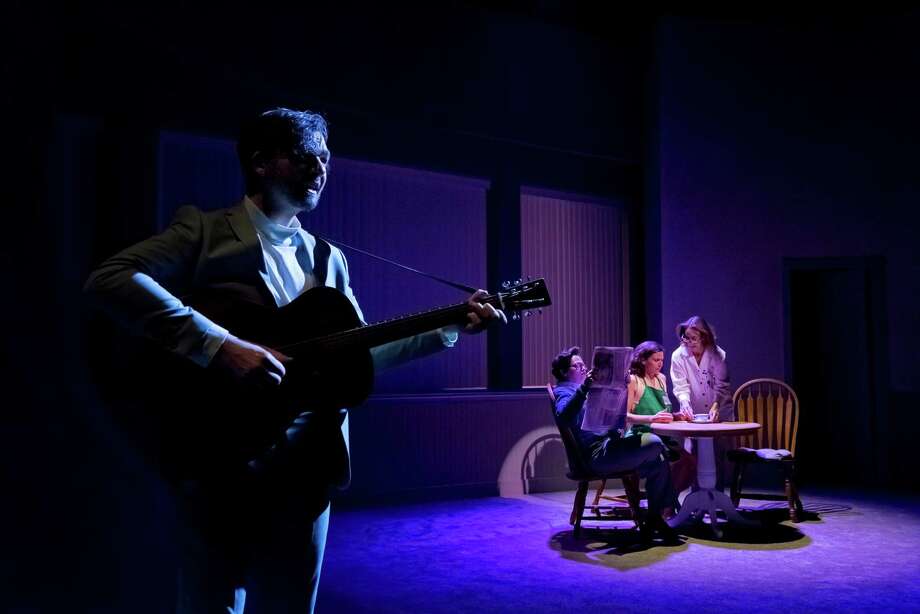 It’s easy to describe “Leap and the Net Will Appear” as the ideal Catastrophic Theatre show.

This debut by New York-based writer Chana Porter is morbid, droll, defies classification and has something to say about how hard it is to find meaning in life. Many Catastrophic Theatre programs can be described this way, making the theater one of the few in the city – and, really, in the country – with an aesthetic that is specific and consistent, yet never predictable. Unpredictability is, in fact, part of the Catastrophic palate.

But despite all of its elements that would make any Catastrophic fan excited, “Leap” lacks the singularity of a more “classic” production, like a Wallace Shawn or Beckett play. “Leap” is defiantly weird. It’s even confident in its bizarre roller coaster of a plot. It also seems to defy any complaint it draws.

The play doesn’t wrap up in the end? It never wanted to.

The plot doesn’t make much sense? That’s because it’s about an internal life that struggles to find logic.

And the production doesn’t make you feel any which way? Well, it didn’t want to dictate specific responses in the first place.

Plays that lack centrality, however, need voice to take its place. That’s why the similarly disjointed “Snow White,” the Donald Barthelme adaptation that premiered at Catastrophic Theatre last year, was a joy. No one speaks like Barthelme. Porter, on the other hand, speaks like no one (or you could say everyone)

The title is a riff on bad advice. Leap and the net will appear – what a broad and unhelpful aphorism thrown in the face of single women in their 30s and 40s the world over, the play suggests. Yet there is no opposite line offered in its place, no anti-aphorism that is specific, helpful, cutting, truthful or counterintuitive.

The plot is hard to describe. Scenes move from one to another, and it’s best to take it all in sans preconceived notions. A blandly eccentric woman, Margie (Amy Bruce), is told to find love in a man and marries the rich but cookie-cutter Laurence (Jovan Jackson). They have a child, played by Jayden Key, who is made to pretend to be a Roman soldier.

Margie abandons her family in a quest to find meaning in foreign countries, toting a copy of Elizabeth Gilbert’s “Eat Pray Love” and wondering if she’s doing those things in the right order – wondering if she’s following the right advice from her father, played in a broad and cuttingly comedic performance by Tamarie Cooper. When Margie returns, events spin into such chaos they border on magical realism.

But “Eat Pray Love,” a true story about a privileged white American woman finding love and meaning in India, Brazil and other exotic lands, isn’t just an easy target because it’s a journey with colonialist overtones. “Eat Pray Love” has something to say that’s earnest. “Leap” makes fun of self-help books like it. But the play should go further when it comes to talking about personal fulfillment.

Margie has a fantasy about being a lion. I loved when she said being a human is too confusing and would prefer a life worrying only about eating, pooping and having sex. What a terrific image: a woman eating breakfast in a generic middle-American condo (set design, with carpets so dull I’ve already forgotten what color they were, by Ryan McGettigan) while fantasizing about hunting gazelle in a prairie. But Porter doesn’t follow that path all the way, the one that explores what it truly means to abandon rationality – and therefore neuroses, pathology and over-analysis.

Put it another way: You can tell what Porter doesn’t believe in, but not what she does. Catastrophic has found a peculiar new voice that, for her next play, could harness the loose, raucous energy of “Leap” for a comedy with an even stronger perspective.

The theater has already made a good production out of Porter’s premiere (Tara Ahmadinejad directs), with worthy showcases from Cooper, Bruce and singer/narrator Andrew Lynch. I just want to know more about this writer’s mind. I want to know what happens when a woman becomes a lion, or what Porter actually thinks about eating, praying and loving.